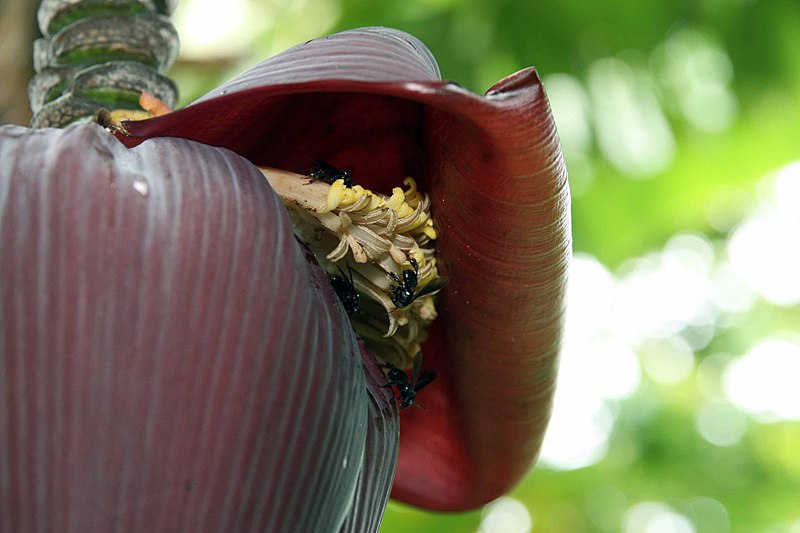 I recently found out one of my friends never heard of purple bananas. That is a pity, because according to me, these Musa acuminata taste much better and they are sold by nicer people than their well-known yellow counterparts, and according to Wikipedia, they contain more beta carotene and vitamin C as well. Unfortunately, they may be just as prone to the feared Panama-disease as their famous Cavendish-cousin, so you might find out one day, they’re all gone – death by infection.

(text continues below the picture)

John McAree says the first bananas to appear on the market in Toronto, in the 1870’s and 1880’s, were also red bananas (or pink, or purple if you like). However, it seems bananas have a thing against being commercialized. Throughout their commercial history, bananas have been haunted by drama. Why? Because unlike ‘real’ fruits, bananas are technically more like herbs that do not necessarily stem from two different parents, but are usually planted as clones from one and the same. And like in any monoculture, the lack of genetic variability makes them vulnerable to invading predators, fungi, viruses and bacteria. Kill one, kill all.

First time they were hit by public tragedy was in the 1950’s, when the commercial production of the then-popular Gros Michel banana was roughly wiped out by the Panama disease. As the Gros Michel was the only type of banana eaten in the United States from the late 19th century until after World War II, the hunt was on for a type which was believed to be immune to the disease: the Cavendish, which is flooding modern supermarkets these days. Yet, researchers like Dr Gert Kema warn, now Cavendish is due to die of … the Panama disease, a.k.a. the Fusarium fungus, which managed to develop a new strain that is capable of killing the Cavendish too.

Still, death by disease is not the only scarf on the banana (pseudo)stem. Their name has been associated with banana republics and the banana wars that followed after Latin American banana workers started a kind of a-priori civil rights movement to get paid for their work and educate their families. As they disobeyed US companies such as the United Fruit Company, the American military stepped in to protect their interest. They first intervened in 1846, to intensify their presence after the Watermelon War of 1856 and stay ’till the mid 1930’s, affecting countries including Panama, Cuba, Puerto Rico, Dominican Republic, Nicaragua, Mexico, Haiti and Honduras (which writer O. Henry later dubbed “Banana republic”, starting a metaphor for politically unstable countries that depend on the exportation of a limited-resource product, like bananas).

(text continues below the picture)

So, is the wild red banana the super-banana gonna save all? Many of its kind not so wild after all, as the musa acuminata was one of the first to be domesticated by humans for agriculture, in Southeast Asia around 10.000 years ago. But yes, it is a pioneer, that rapidly exploits disturbed areas like after a forest fire, and it in some ecosystems it is considered a ‘keystone species’ that paves the way for greater wildlife diversity – including fruit eating bats, birds, squirrels, tree shrews, civets, rats, mice, monkeys and apes that help spread their seeds. And no, they grow in a way that makes it very difficult for its male flowers to self-pollinate its female ones, and as said: being related to the Panama-prone Cavendish, it is likely to fall prey to the same fungi.

If we want to keep on eating bananas, Dr Kema suggests, we need to find a new banana that is resistant to the disease ánd genetically diverse. But what if it is not the banana, but us that need to change? Start paying local people to maintain their naturally bio-diverse forests and harvest them responsibly, rather than chopping down rain forests, creating large plantations and ’employing’ people at sub-minimum wages, intoxicating them with pesticides and invading their lands. Musa Acuminata is calling on us: for millenniums it’s been nurturing us, now it is time to nurture it.